“You know why the Yankees always win, Frank?”

“’Cause they have Mickey Mantle?”

“No, it’s ’cause the other teams can’t stop staring at those damn pinstripes.”
– Catch Me If You Can

If you’re one of the many basketball fans tuning into DIRECTV to see who wins the NBA® playoffs, you’ve probably heard a million theories and statistics about what team will win. The data analysts at All Home Connections have developed another theory to throw into the mix: jersey color can predict the NBA playoff winner.

We looked at scores from every NBA playoff game since 2008–and the teams’ colors—then analyzed each primary and secondary team color related to playoff game win record.

With all that data, we predict the Cleveland Cavaliers will win it all. If we’re not right on the money, we’re betting we’ll come pretty darn close. Here’s why.

Since 2008, teams with red as their primary color have clinched 246 wins–the most in the NBA. That adds up, though, since red is the dominant NBA color (worn by 25% of all teams). After taking into account that some colors are worn by more teams than others, silver is the winning color; it has twice as many wins as green and almost 25 times as many wins as teal.

Gray, worn by the Sacramento Kings, is the only secondary color to have 0 wins. They haven’t been to the playoffs since 2006. 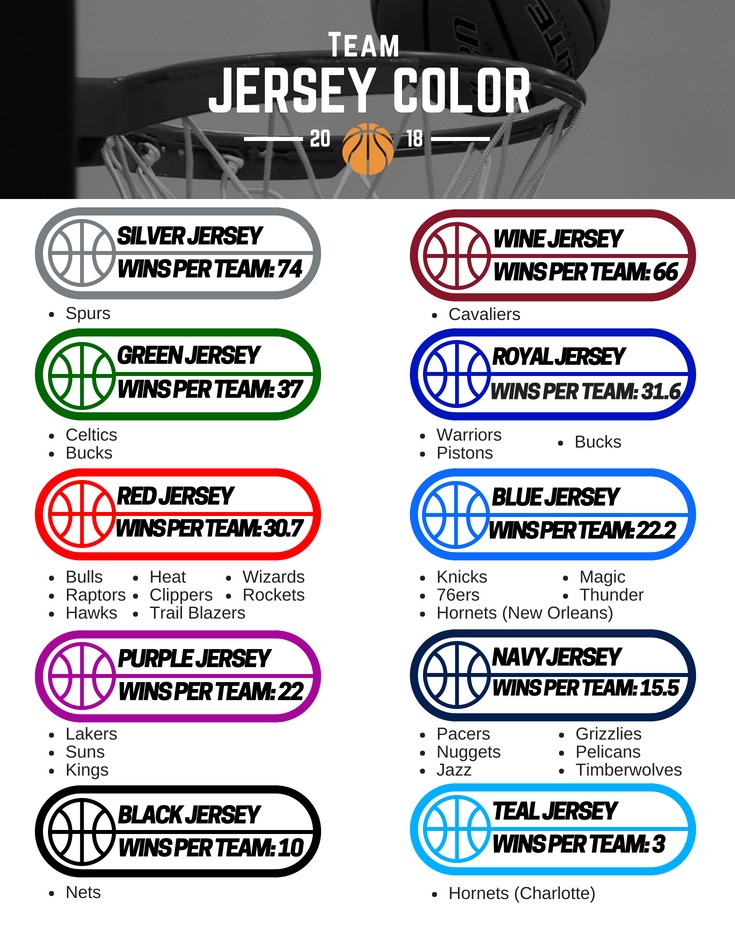 With so many variations of jersey colors out there (like Aurora Green, Mardi Gras Gold, Cream City Cream, and Beale Street Blue) it’s easy to wonder if color psychology really makes a difference.

Color psychology holds more stock than you might think. There’s a reason why most fast-food restaurants feature red and yellow logos, why we’re drawn to certain colors, and why different hues are associated with various emotions and symbols.

It’s worth noting that other studies prove our jersey color theory. One study in particular looked at Olympic uniforms and found that red outperformed blue. Even with primates, red-tinted skin is a sign of dominance and health.

Based on our data, we’ve made the following predictions:

Thus far, our bracket based on color alone predicted 8/12 rounds correctly. Not bad for a theory based on jersey color!

Tune into DIRECTV to see which NBA team wins it all.